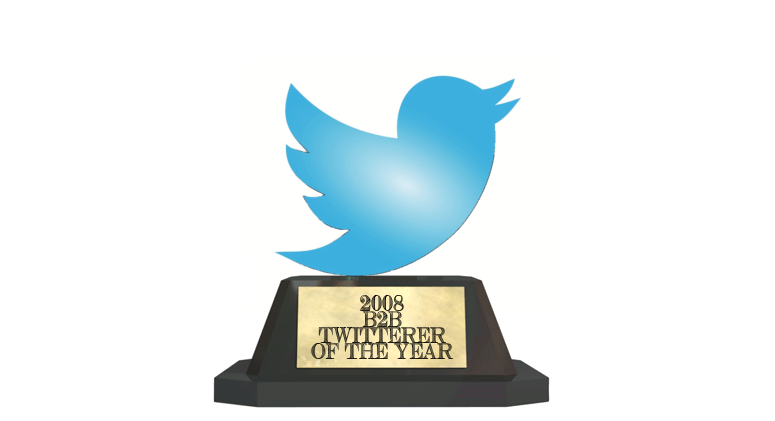 The Marketing Consigliere saw that there was too much ado about Robert Scoble asking people to suggest a “Twitterer of the Year,” and came up with his own idea.  He Googled “B2B Twitterer of the Year” and nothing came up, so he felt obliged to take the initiative to honor a business-to-business company that had shown leadership in use of Twitter.

Many so-called “leaders” of the social networking, blogging, and micro-blogging world have embraced Twitter and have written about the brands that use it, but they’ve mainly focused on consumer brands and not B2B brands, and they certainly missed the one that the Marketing Consigliere has selected.   Have they been interviewed by Scoble?  No.  Covered by TechCrunch?  Of course not.  Blogged about by Jeremiah Owyang?  No.  Mentioned by Guy Kawasaki?  No.

Why did so many people miss out on this company.  Is it “sexy?”  No.  Do they have a silly name consisting of a color and a noun (i.e., OrangeMagnet) or an “invented” 2.0 name (i.e., Kwibango)?  No.   A Web-based product or service? No.  They don’t tweet every day.  They don’t follow many Twitterers, and they don’t have many followers.  So who could this company be and who is the Marketing Consigliere that he can pronounce this?  Well, first the honoree.

United Linen & Uniform Services of Bartlesville, Oklahoma is a 72-year old family run business with 120 employees and 20 more across Oklahoma, Kansas, and Arkansas.  The company cleans 15 million pounds of laundry every year, from uniforms to napkins and welcome mats.  You can follow them @UnitedLinen.  They also have a blog and a Facebook fan page.

They were chosen as “B2B Twitterer of the Year” because it is not a popularity contest.  It’s a recognition of a company that has seized a concept and applied it to their world.  It’s not about being the “bon vivant” of the digital crowd, it’s about trying new things to grow a business and foster dialog with customers.

The technologies that the Marketing Consigliere passionately blogs about are not only for those firms in Boston, Austin, New York, Washington, DC, Seattle, and the Bay Area with a young employee base; they are for anyone that wants to better gather, store, analyze, share, and act upon marketing data.  That includes companies that do what others consider to be mundane.  Like cleaning laundry.

So who does the Marketing Consigliere think he is that he can proclaim a B2B Twitterer of the Year and steal some of the thunder from the popular boys?  This award has nothing to do with the number of followers or the “coolness” of your product or facility. He just thinks he’s a nice Italian boy who happens to like to sit in Italian restaurants with clean tablecloths and napkins, for one thing.  And he likes to see net-centric marketing technology used by all, including SMBs in the heartland, not just those who live in the “bleeding edge” space.  Giving an award like this to a tech company is like letting someone hit a home run from third base…. And besides, no one else took the initative, so the “die is cast.”

Congratulations to United Linen & Uniform Services of Bartlesville, Oklahoma for being the 2008 B2B Twitterer of the Year!  And thanks to Scott Townsend, United Linen’s Marketing Director, for helping his company become more network-centric!