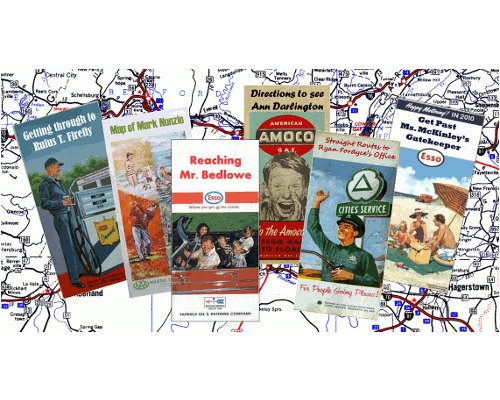 Many years before the appearance of the Holy Social Media Trinity (Twitter, Facebook and LinkedIn), it was very time consuming to figure out who knew each other and how to reach a particular person you did not directly know. “No Soliciting” signs, gatekeepers, and basic lack of visibility into an organization have kept Salespeople away from prospects since the dawn of the candlestick telephone.

But social media is here to stay and its value in the B2B world is growing every day. There are some great tools out there to facilitate salespeople getting through to the elusive decision maker.

The other week, The Marketing Consigliere reported about the visit of Salesforce.com‘s “Cloudforce 2 Tour,” where he saw some interesting applications that were part of the Salesforce ecosystem. One of these applications is PeopleMaps, a social graphing application developed by 7 Degrees, Inc. PeopleMaps is a business intelligence tool that graphically depicts the mashup of several social networks to present as accurate a view as possible of a prospect’s relationship to a salesperson. Every relationship between people or organizations is weighted from an algorithm that measures volume of connections and frequency of communication.

When shared among coworkers, the aggregated data can determine who in the organization may have the strongest channel to a particular individual. Also, by understanding the prospect’s network and the various paths to that prospect, a salesperson can hypothetically select the most probable path of success for getting through to that prospect (or in other words, from the salesperson’s perspective, “path of least resistance”).

Being very interested after meeting CEO Tim Sheehan and seeing an impressive demo of how PeopleMaps worked, The Marketing Consigliere decided to take advantage of the 7-day trial that was available. The trial allows a choice – either the free version, or the very tempting, premium $49 dollar per month version – which entails the prospect path weights, lead assignment capability, contact manager and the integration with the popular CRM tool Salesforce. Shortly after relinquishing his precious credit card number he was able to quickly upload his Gmail, Facebook, LinkedIn, and Outlook contacts.

Well, it didn’t take long for the computer monitor to get crowded with The Marketing Consigliere’s network as he expanded the nodes of alphabetically arranged contacts. It was beginning to look like a crowd at the San Gennaro festival on Mulberry Street.

So he expanded it a little and got this view that reminded him why he used to skip biology class in school and go play craps in the alley instead. (Sono fessacchione! He didn’t want you to know that…) 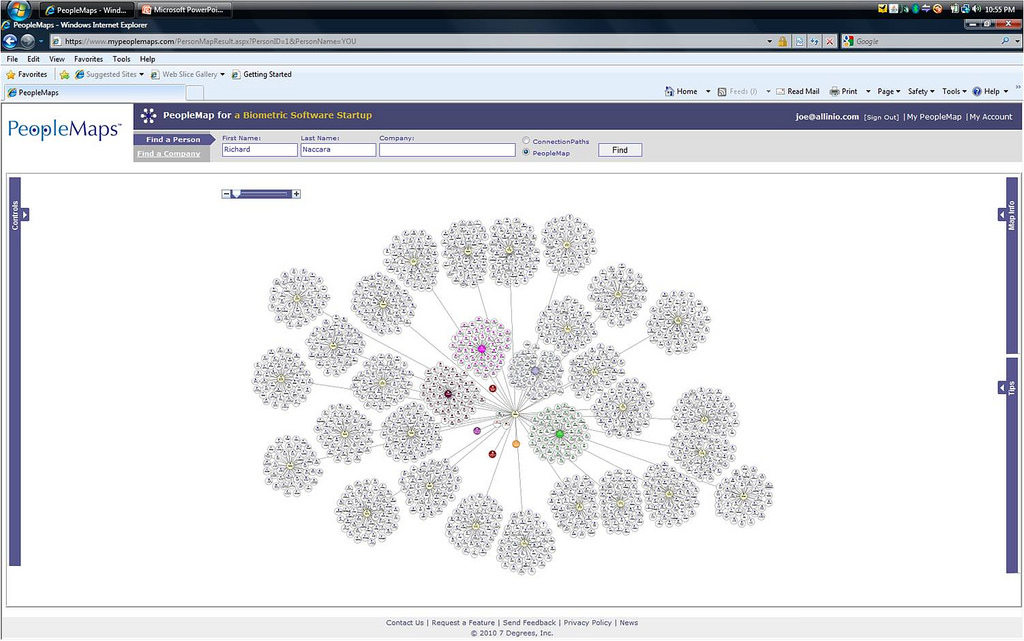 Below is an example of the paths to a person you need to talk to. Click on the screenshot to get a better view. The person at the bottom needs to speak with The Marketing Consigliere for advice. There are several paths to choose, but in this case it is clear that the person at the bottom has a very clear path, so we would hope he is smart enough to pursue that first. You would be amazed at who comes to The Marketing Consigliere for advice…some of them actually are “legitimate businessmen.”

On the down side, the site did run a little slow, perhaps due to the extent of The Marketing Consigliere’s network clogging up the server. The presentation worked with Internet Explorer but was problematic when using Mozilla Firefox; both applications had some “Not Responding” messages when trying to delete contacts in the management mode. Upon doing a traceroute of the Utah-based web server several times, it appeared as though the final hops of the connection were the most latent.

Also, some contacts were duplicated from the different sources and there is no way to merge them like you can with multiple Salesforce contacts. Additionally, you cannot edit contacts in bulk; each contact must be opened individually to delete it, which The Marketing Consigliere finds rather time consuming. Last but not least, there is not instant integration from Salesforce, or at least it is not intuitive – despite instructions to the contrary, there was no AppExchange “Get it Now” button to click and download the installer for the app. Someone at the AppExchange may be backlogged at configuring that type of thing.

All in all, The Marketing Consigliere understands such growing pains of startup companies and forgives PeopleMaps for any current shortcomings – Timothy Sheehan and company are probably already working to get more processing power or migrate their server to a data center closer to a peering point, and planning better UI on their product roadmap – you should look forward to seeing more utility come out of this potentially valuable tool for B2B Marketing professionals and salespeople.