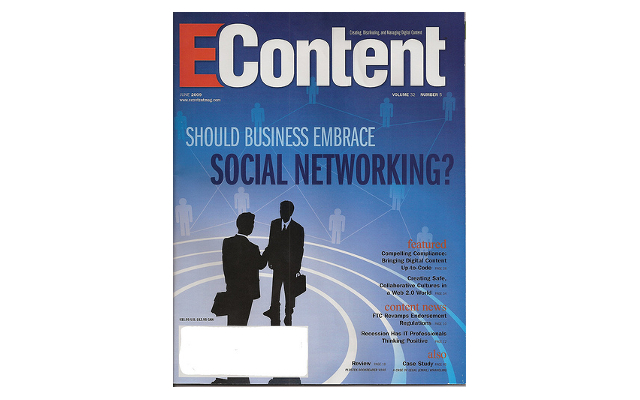 After seeing the cover “Should Business Embrace Social Networking?” in the June 2009 EContent Magazine,  The Marketing Consigliere was considering making this his shortest blogpost ever by simply saying “Yes,” but decided to read the article to see what a magazine focusing on online content had to say about social networking.

Actually, it’s quite a good and concise article written by Carolina K. Reid and is good for a sophisticated tech audience that’s not necessarily sophisticated when it comes to social networking in an enterprise context.  Enterprises are using social networking tools for lead generation, customer satisfaction/customer support/customer service, branding, competitive intelligence, and product management.

While the loss of control of the message is a common fear among marketers, the simple truth is the conversation may go on “without you” so you have to accept that as part of the game.  While The Marketing Consigliere advocates the military “Command, Control, Computers, and Communication” (C4) model for Network-Centric Marketers, most social networking proponents say the “Command” and “Control”  aspects won’t work in a social networking environment.  Ultimately, you are in command and control of your position, but not the dialogue.

Obviously for internal enterprise purposes only, social networking still falls under a Command and Control scenario, but the hierarchies of the corporate structure still need to be flexible in order to be creative in a social networking environment.

Ms. Reid has written a good article and doesn’t fall back on the “Ning bandwagon” – her audience is savvy and she talks about robust enterprise apps like Lithium and BrightIdea, giving examples of how they are being leveraged.

As more businesses create communities (remember when they were called intranets and extranets? That generally implied linking data and applications, but now it truly is linking people), they will have to perform more due diligence to make sure the growing number of community platforms out there meet their needs, and the community‘s needs.