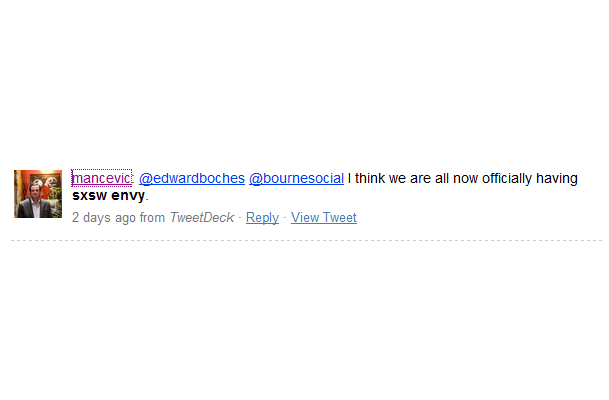 The Marketing Consigliere recently blogged about “Twitter Envy,” but since he was already on Twitter approaching two years, can’t say he remembers knowing enough about Twitter to be envious of it before he started dabbling in it. And being a B2B Marketer, he had never heard of SXSW until he started using Twitter (Come to think of it, Twitter has really expanded his horizons since he had never heard of TED or Davos either – He’s just a nice Italian boy who knows his food and Marketing).

At first it seemed like a giant recess for the youthful, goateed crowd who were far more versed in social media and mobile Internet than he. This funny sort of Spring Break in, of all places, a land-locked section of Texas appeared not to be the jurisdiction of serious, discplined Marketers, especially of the blue-blooded B2B batch. It’s taken a year, but now The Marketing Consigliere admits SXSW is misunderstood by outsiders – there is value to this event, and even admits he has SXSW Envy to the point he wishes he was there this year and would jump on a plane if offered the ticket.

The reason he would jump on a plane and is because his particular strain of SXSW Envy is highly evolved. Yes, the goateed crowd is still enjoying recess, but the adults are moving in. That is, the B2B Marketing crowd. This event is not about titillating onself over “bright shiny objects,” it’s about making money- more and more. The “Interactive” conference of SXSW for the first time was attended by a larger crowd than the “Music” conference of SXSW, which was the actual origin of the program started in 1987.

B2B is in the audience, on the panels and manning the exhibit booths. Naturally anyone from a creative advertising and marketing agency is going to attend, and world-class firms like AKQA, Porter Novelli (The Marketing Consigliere remembers way back when paisano William Novelli ran his agency in Georgetown) and GeniusRocket are there.

But non-creative, straightforward B2B products and services are staking their ground there also. Perhaps the black tee-shirted, Chris Brogan/Seth Godin/GaryVee devotees will not like having their sandbox invaded by disciples of Philip Kotler, Robert Miller & Stephen Heiman, and Peter Drucker (The Marketing Consigliere harbors no disrespect for the former list of gentlemen, he is just poking fun at the the relative ignorance of their followers regarding the giants in the latter list).

On another note, the Air National Guard, obviously not B2B, was there probably to recruit many of the unemployed, goateed hipster-geeks with the lure of true technology that really makes a difference.

All in all, there really is nothing wrong with having or admitting that you have SXSW Envy. Because not only does it mean you know you’re missing out on a great business networking and learning experience, but also because you’re missing some of the best barbeque and live music in the country down there in Austin, Texas.

Perhaps even Steve Rubel, a great B2B and Marketing thought leader, has a slight case SXSW Envy, although he seems to be managing it or at least trying to downplay it (see his tweet above – hee hee) Now The Marketing Consigliere doesn’t feel as bad knowing that others much mightier than himself in the Marketing world have contracted SXSW Envy.

The good news is that a generation of younger thought leaders like Kipp Bodnar (@kbodnar32) and (Jeffrey Cohen (@jeffreylcohen) are taking the initiative to help conquer portions of SXSW for the greater glory of B2B.

Will SXSW become a victim of its own success? Like the Internet which was taken over by legions of corporate suits, will SXSW meet a similar fate and lose its “soul?” The Marketing Consigliere thinks so. Social media, creativity and innovation are not “dead’ or “ruined” despite the fears of the Redbull and vodka set. Perhaps this new generation of bootstrapping entrepreneurs will take ultimately take us in a new direction without suits. But in the meantime, if you don’t like suits commandeering your sandbox, perhaps you should go to Burning Man. There’s a lot more sand and nobody is dumb enough to wear a suit out there.