Too Many “Gurus” Who Don’t Know the Basics

Too Many “Gurus” Who Don’t Know the Basics 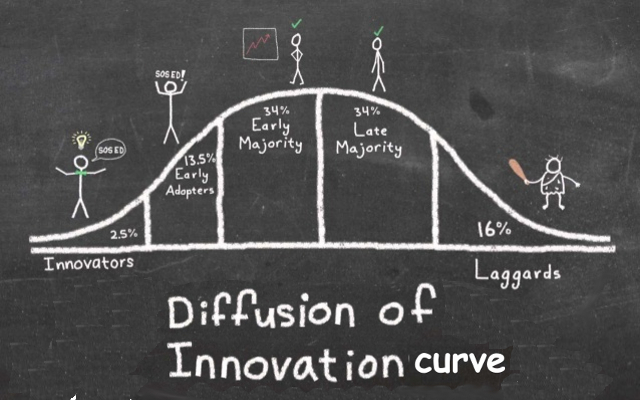 Although it was a long time ago, the Marketing Consigliere went through too much pain and suffering in business school to tolerate all the social media “gurus” who think they are marketing experts just that because they rank highly on Twitter charts or shave their head like some Seth Godin wanna-be.  Heaven forbid that overwhelmed, desperate Marketing professionals should listen to them or even pay them out of their dwindling marketing budget.

Because of his grueling ordeal of getting an MBA, when the Marketing Consigliere hears a “guru” refer to an early adopter, he slightly cringes because most people do not properly understand the Diffusion of Innovation as first modeled by Everett Rogers.

While this is not the best exercise in statistics, there’s a point here. According to the Diffusion of Innovation model, Twitter is still in the Innovators stage of adoption, not Early Adopters.  While one may argue that “respectable opinion leader” users, which are characteristic of Early Adopters, are indeed using Twitter, the number shows where we are in the model – Twitter is still in an innovation stage.  And because so many Innovators are following other Innovators, and most of these innovators haven’t truly been “disciplined” marketers from an academic or even practical sense, they mistakenly think more people are using Twitter and also mistakenly label themselves as Early Adopters.

There’s nothing inherently wrong with a technology still being in the Innovators stage.  However, it’s important for professional “working stiff” Marketers to know when they’re dealing with charlatans who love to tell you how early adopting and wonderful they are.  So if your “rock star” social media consultant keeps referring to Early Adopters and hasn’t done the math, you might be dealing with one of them.

Oh, and the Marketing Consigliere does not think he is a marketing guru because he earned an MBA with a concentration in Industrial Marketing (that was before the phrase “B2B” was coined).  For the record, his diploma is still in its mailer tube after almost 20 years.   He’s not a guru at all – he is a humble consigliere – an advisor.