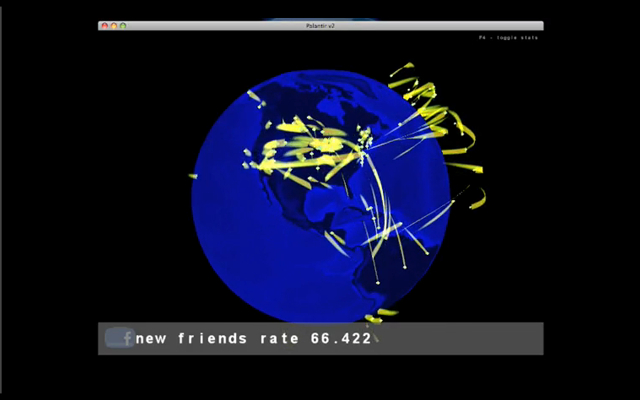 There are many businesspeople and Marketers out there who don’t “get” social networking tools like Facebook and Twitter.  For the Doubting Thomas(es) out there that think these tools are “toy”s for the college and underemployed crowd, the Marketing Consigliere has news for you.

He’s always been an admirer of David Troy‘s Twittervision, which shows one Twitter “Tweet” at a time all over the globe using Google Earth.  And recently he heard about an app that Facebook is using can show realtime usage of its social networking platform.

Twittervision shows the constant chatter that’s out there – some tweets are interesting, and yes, some are incomprehensible if not frivolous.  But if you think about it, it’s an international phenomenon.  And building on that is the Facebook video linked above that really emphasizes the continual global exchange of communication between people.

This illustration of interaction is not a passing fad.  There may be an evolving form of these interactions, but they will continue to increase in quantity and quality as either Facebook gets adopted more and also gets more sophisticated – or a more sophisticated social networking platform comes along that fills an addtional need.

Whether you are a B2B or B2C Marketer, this growing occurrence has implications for you and your organization.  There is information out there that data mining can provide that could be incredible.    Don’t ignore it any longer.

Feel free to associate with the Marketing Consigliere – here are his profiles on LinkedIn, Facebook, and Twitter.