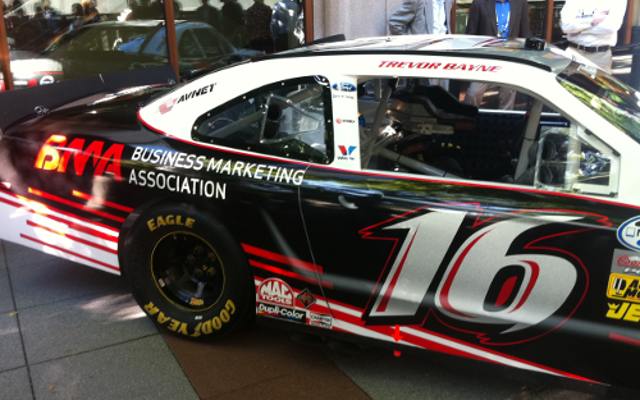 The Business Marketing Association‘s 2011 International Conference in Chicago was a great success for all who attended.    Many attendees were from traditional agencies and overall the sessions were very good in catering to them-  Yes, you too should have been there if you are a “data driven” B2B Marketer, but not just because you could have met Trevor Bayne, the 20-year old Daytona 500 champion driver and his NASCAR racer with the BMA Logo on it (Thanks to major sponsor and BMA member Avnet)  There were three sessions that were absolutely fantastic from a data perspective.

Session: “Unleash the Power of Analytics”

After the previous full day of sessions, it wasn’t until the afternoon of the second day that the agenda reflected a true data-related topic.  This session was given by John Kennedy, Vice President, Corporate Marketing at IBM, and was a lively one.  If you think that IBM is a behemoth stuck in the 1980s, guess again.  John addressed two things:  First, he told how innovators at IBM use marketing analytics to better understand customer motivations and predict their buying behavior.  Data is not solely IT’s responsibility; it is Marketing’s also.  Second, he also told the story of Watson, a major, successful attempt by IBM in artificial intelligence that gained notoriety by beating the best champions of the famous Jeopardy! television game show.  The whole point of Watson, however, was not to “beat” the humans, but rather to show how accurate artificial intelligence can be when applied toward natural language processing, given the countless nuances of the English language that include irony, humor, and metaphor.  The groundbreaking analytical power of Watson will be helping businesses with the unstructured data that is growing in the digitsphere.  You’ll be hearing more about such intelligence before you know it.

While this was not a “technical” session, the shining moments of it came through with the presence and words of Kim Paulsen, Senior Vice President of Penton Marketing Services, who was on the panel.  Penton Media recently acquired EyeTraffic Media, a firm with its offices not far from Allinio in the Washington DC area.  The beauty of this acquisition is that Penton Media, with its publications that have broad coverage of B2B industries, shows that it “gets it” when it comes to the network-centric world.  Penton can help many of its advertisers by being the backbone of their marketing efforts.  From our experience, many Marketers do not necessarily have the analytical and research wherewithal that is required in today’s fast paced B2B Marketing world.  With Penton’s services, advertisers can do more than just advertise; they can get better leads and insight into the Penton audience in the advertiser’s particular market.  It is good to see them taking the lead by bring much more value to their customers.  Ms. Paulsen projected the positive, optimistic attitude that Penton has towards this effort.  While this may overlap with what agencies are trying to do, in our opinion, it is a logical evolution of print publishers needing additional revenue streams and long horizon customer relationships.  (Hey Crain, IHS, McGraw-Hill, 1105 Media and Ziff Davis– are you taking notes?)

The pièce de résistance of the BMA conference was this almost last panel of the last day.  The panel was comprised of more stellar B2B Marketing practitioners: Theresa Kushner (@tkushner), Director, Customer Intelligence, Cisco; Bill Romenesko, (@bromen1) Global CDM Senior Manager, Dell; Darryl McDonald, (@Darryl_McDonald) Executive Vice President, Business Development and Marketing, Teradata; and John Coe, President, B2BMarketing.com. They spoke of the need to have a strategic perspective with data – align your data strategy with your overall business and marketing strategy.  John Coe summed it up best when he used a high diving analogy – your success in diving depends on what you do with your head; the rest of your body will follow.  Of course, there is a need for data to have a tactical perspective as well.  The importance of data in campaign success is a given; outline the typical sales or buying process and create a data map to each process.  While managing a database can be an overwhelming task, it is required to survive in today’s network centric marketing world.

Rumor has it that the 2012 BMA International Conference will be held in New York City.  It can’t come soon enough, but in the meantime, you may want to check out the Online Marketing Summit (OMS) at various United States cities from June through September,  and NCDM in Las Vegas from December 12-14