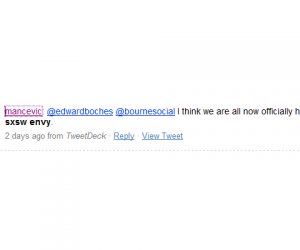 The Marketing Consigliere recently blogged about “Twitter Envy,” but since he was already on Twitter approaching two years, can’t say he remembers knowing enough about Twitter to be envious of it before he started dabbling in it. And being a B2B Marketer, he had never heard of SXSW until he started using Twitter (Come to think of it, Twitter has really expanded his horizons since […]