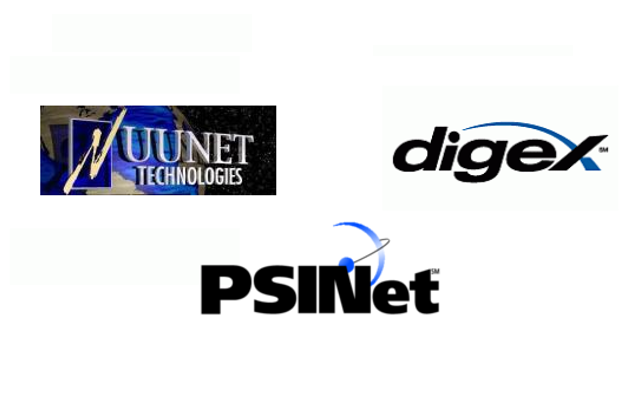 The Marketing Consigliere would like to take the opportunity at the dawn of 2009 to go down memory lane.  While much fuss is heard about Silicon Valley, the real center of the Internet universe was and still is the Washington DC area.

About 20 years ago, the academic and Federal government curiousity called the “Internet” found its way into the commercial sector.  Among the Internet leadership in the Washington, DC area that began taking advantage of this promising technology were three notable companies.  And AOL is not one of them; AOL used a proprietary protocol well into the Internet era, not TCP/IP.  So before they vanish from even the footnotes of Internet history, let’s remember who they were.

DIGEX, UUNET, and PSINet all were formed within a few years of each other and were some of the leading Internet Service Providers of the 1990s.  With some of the smartest network engineers in the world, they raced to cover the nation and the globe with the routers and switches that would carry packets from your desktop to somewhere else in the blink of an eye.  It was these companies who hired scores of young people to work in call center and help level the playing field for SMBs who needed to grow.

Twenty years later, these three pioneers do not exist as the scrappy startups they once were. UUNET cashed out when swallowed by WorldCom, DIGEX was swallowed by Intermedia Communications and then by WorldCom.  PSINet, compared to the other two, was an arrogant and ineptly managed company – the company went bankrupt in 2001 and its assets were sold pennies on the dollar.

The Marketing Consigliere had the pleasure of working for DIGEX and the displeasure of working for PSINet.  But he definitely is wiser for being at both and looks forward to the next generation of progress towards the network centric marketing world.  So as you trudge forward into this brave new world, remember the companies that helped blaze the trails…