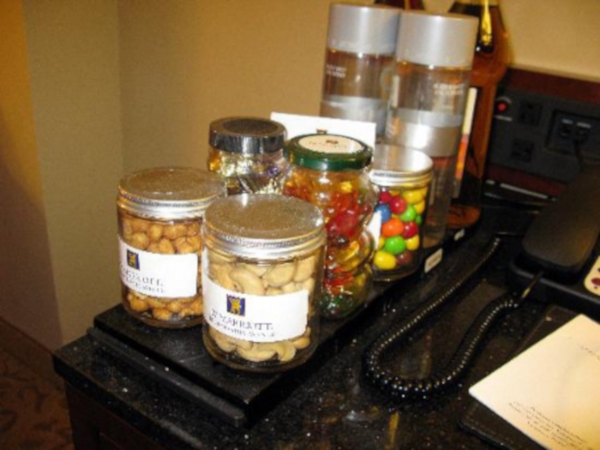 As an advocate of Marketing and Sales Automation, Allinio is usually very positive about advances made in this space.  However, a recent stay in the Marriott Marquis San Francisco during Dreamforce proved that automation can go too far.  We don’t think we’ve been under a rock when it comes to blogging about automated ways to market and sell, but this was the first time we ran into something like this.

You walk in your room and voilà!  There’s a colorful array of snacks on your desk, which you need to set your laptop on in order to work.  In the past, these snacks would sit in the min-bar or refrigerator, hopefully out of sight and out of mind.  Not wanting to fail to resist temptation, you move it aside and set up to work.

The next day, after going to sessions and meandering around the exhibit floor, picking up all sorts of dead trees and S.W.A.G., you come back to your room and toss stuff on the work surface, knocking the tray and dislodging some of the snacks.

It is only then, when you pick up the candy packages, do you spy the little card that says if you remove stuff from the tray, you will be billed automatically, even if you really don’t consume the products.

In shock, you put everything back in its place.  But upon thinking about it, you feel incensed and call hotel management to have it all removed.  Someone comes shortly and says they can remove the snacks, but not the tray.  For now, that is a compromise, especially when they say you will not be billed.

Another day goes by, and you have forgotten about the incident, being all wrapped up in the conference.  But on the last morning, you see the bill slipped underneath your door and lo and behold, you are charged for every snack that was on the tray, totalling and extra $85.31 to your bill. 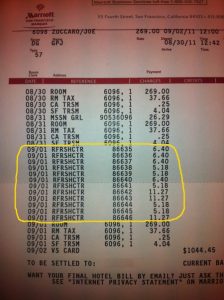 Fortunately, when you go to the main counter downstairs to check out, they remove the items from your bill without a question.

But did it have to be that way?  Must the hospitality industry, especially a squeaky-clean reputed company like Marriott,  put these “entrapments” in your room because most people wouldn’t go to a snack machine down the hall by the ice machine?  Because they think the odds are in their favor that in a moment of weakness, a guest will reach for the bag of M&Ms?

While there might be some useful data to aggregate from that regarding which snacks are bought when and by whom, it is in our humble opinion, a bit too much to have such transactions automated, especially when the system didn’t work and you had to go out of your way to correct your bill with hotel management.

Have you had this happen to you?  What did you think?