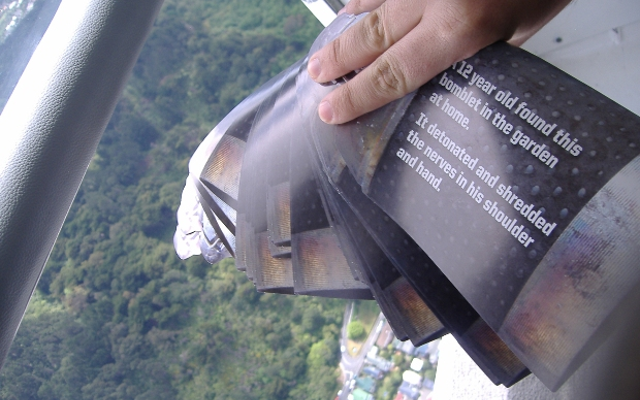 When does offline beat online?  When you need to make a point about the physical world and physical media can pack the most punch.  The Marketing Consigliere likes to focus on Internet based technologies that marketers should use, but tips his hat to some good old-fashioned analog ingenuity.  DMNews recently highlighted a very creative effort by agency DraftFCB New Zealand that helped their client, the Aotearoa New Zealand Cluster Munition Coalition (ANZCMC)

A year ago,  The Wellington Conference on Cluster Munitions, the largest disarmament meeting ever convened in New Zealand, was an opportunity for the ANZCMC to promote their cause.  They played a crucial role in raising awareness of New Zealanders on the issue of cluster bombs, wanting to rally the populace to garner opposition a weapon that doesn’t exist in New Zealand and most citizens had most likely never thought much about.

They printed thousands of M-85 cluster bomblet-shaped leaflets, which explained the deadly threat of cluster bombs, and also served as petitions for people to send to the New Zealand Ministry of Defence.

Out of  “concerns for litter,” the Wellington City government refused to give the group permission to fly a helicopter to drop leaflets over the city.  However, the ANZCMC went ahead anyway with an airplane, dropping 30,000 of the leaflets.  This video, posted on YouTube, shows some graphic depictions of victims of cluster bombs, but is overall a great recap of what the ANZCMC accomplished.

The effort was covered by major New Zealand media, and DMNews reports that over one third of the leaflets were sent in.  However, the Marketing Consigliere couldn’t imagine a that high of a response rate given the random landing of leaflets dropped from an airplane.  While the ANZCMC reports a few thousand petitions being submitted to the New Zealand MOD, it is uncertain whether they were all the result of the air drop or from other distibutions of the pamphlet during that time period.

Nevertheless, it is good to see agencies helping their clients achieve positive results with offline campaign management.  It is with dark irony that they used the same distibution method as cluster bombs to make their point.   This is not an example of Net-Centric Marketing, but is a great example of public relations for a cause.