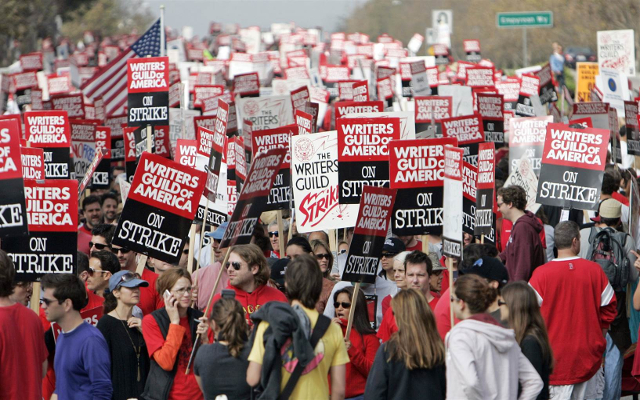 While we have a classic case of challenging those who control the “means of production,” there is something new that the Writers Guild of America should worry about. This is a test of Network-Centric Marketing – of the “wisdom of crowds,” of social networking, and of public relations and brand management.

CSI is already on Second Life, inviting viewers to “act” in its virtual episode. While the basic script guidelines have already been created, here is a chance for improvisation and collaboration by participants.

Today producers of television shows have an advantage – This is not like a strike from the 30s, 40s, or 50s. We’re talking about creative content, and the picket line is irrelevant in the networked world. Additionally, the “scabs” who can step in and help create content can come from the pool of millions of loyal viewers, many of which (but certainly not most) can probably create storylines just as well as most of the 12,000 members of the Writers Guild of America.

We’ve already had advertisers allow customers to create advertisements, as illustrated by the famous Doritos “Crash the Super Bowl” commercial during Superbowl XLIII.

The data gathered from loyal fans can be used to make great content, and to attract more advertisers who don’t mind that a picket line has been “crossed.” This conflict can actually strengthen the brand and the producers can win the PR battle by recruiting viewer/scabs that participate in the networked world.