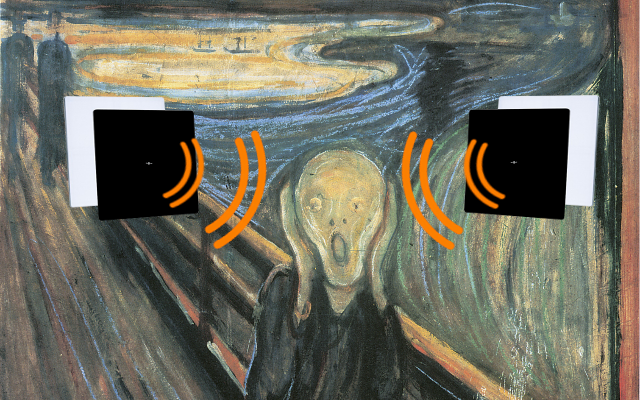 In the April 2008 Wired in “It’s All in Your Head,” Clive Thompson recently wrote about technology beaming to our heads and the inevitable civil rights battle over the act of doing so. While it is reminiscent of my February blog entitled “EmSense – Common Sense or Nonsense?,” it’s not about mind reading but about mind influencing – through advertising.

The interesting technology, ultrasound, creates sounds whose wavelengths in the millimeter range, and therefore can be projected in a very narrow, relatively straight beam – think laser, but not necessarily “pinpoint.” It’s actually been around for a number of years but hasn’t been heard about much (no pun intended). But with price points dropping and range of depth increasing, you probably will hear more about it (again, no pun intended).

I quickly found two North American based companies that appear to be leaders in this field: Holosonic Research Labs of Watertown, Massachusetts, and American Technology Corporation of San Diego, California.

Influence Media of Langley, British Columbia, is an American Technology Corporation reseller and has a very interesting platform in its EyeBox2/EyeAnalytics product. With it, you can “see” who is looking at your billboard/hi-def screen, prop, or whatever, and deliver a “private” message to that individual that only he or she can hear.

I believe the concept is both interesting and feasible, and it will likely be successful for the early adopters. While there may be some suspicion at first by privacy rights groups and some consumers, the real problem will be when this type of advertising proliferates.

Once price points allow a large scale of it, there could be an almost spam-like deluge of it in our streets, malls, arenas and other public places where sometimes we just want to think. Can you imagine those speakers on buildings everywhere like cell antennae, pointing down every which way? Will municipal governments have to draft new regulations for this technology to keep parks, beaches, hospital zones, schools, libraries, etc. free from such marketing? Would taggers spray paint sidewalks so people could know where to walk without getting “assaulted?”

Would there be other “backlash” that some enthusiastic Net-Centric Marketers did not anticipate? Hmm. I better find a quiet place to think about it…