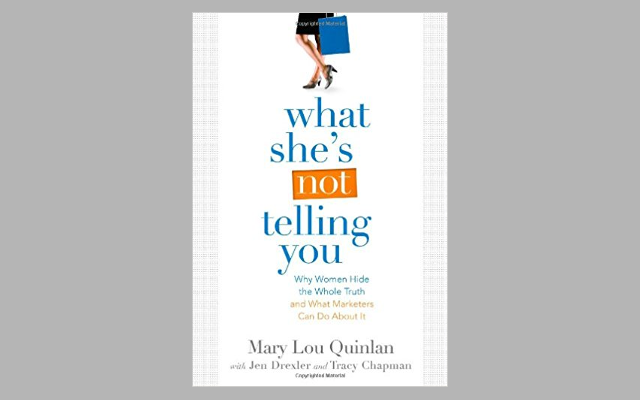 If you want to market to women, take some advice from Francesco Maria Piave, Giuseppe Verdi‘s librettist, who said it best in Act III, Scene 2, with the famous aria by the Duke of Mantua in the opera Rigoletto:

“Women are fickle
Like a feather in the wind,
They change in tone – and in thought
Always a loveable,
Graceful visage,
That in tears or in laughter – is lying.”

OK, The Marketing Consigliere loves opera because it so passionately portrays the human condition (and his mother played it every Sunday during pasta dinners)  But before the PC police try to shut him down for merely quoting some lines from a pivotal piece of western culture, we must now fast forward into the 21st Century to a more enlightened, less Neandertal era – where one may, with great professional risk, argue the lyrics still ring true, but now there’s a book to help you understand “why.”

What She’s Not Telling You – Why Woman Hide the Whole Truth and What Marketers Can Do About It is a very interesting read by Mary Lou Quinlan, Jen Drexler, and Tracy Chapman.  These women run Just Ask a Woman, a New York-based B2C consultancy focusing on marketing to women.  Their book is a great testimony to the thousands of “woman hours” they have spent working with top brands; it is a very pleasurable read full of examples of what marketers do right and wrong with regard to marketing and women.  The main message of the book is “stop marketing to women and start marketing with them.”

The book is straightfoward and admits that women tell “half truths” to marketers.  This is not because women are “liars,” but because there are things they say that aren’t necessarily meant to be literal.  They came up with their own model to describe the “five universal emotional drivers” that women communicate which are not easily understood by Marketers, thus leading those Marketers to sometimes making flawed decisions.  “GAMES” (Good intentions, Approval seeking, Martyrdom, Ego protection, and Secret keeping) can help you break down the messages from women to detect ulterior truths that are the” real” them.

The key here is having actual dialog; much of what the authors are sharing are based on good old fashioned primary research consisting of interviews and focus groups.  It is this dialog that brings forth the many good anecdotes that are threaded through the book.  The illustrations are lively and help make it an almost magazine article like read.

Being a man, however, the Marketing Consigliere did wish that other things were in the book.  While there were some references to the differences between men and women, he would have liked to see more statistics regarding the different purchasing and other behaviors between the genders.  Additionally, it would have been interesting to see the GAMES model contrasted with accepted psychographics used by Marketers and any deviations due to various cultures now growing in the United States.

With due credit to the authors, they did not want to “date” their book so relegated content regarding the use of new media by women to just that – a companion blog that augments the GAMES model in the book.  However, it would also be good to see more results from research that shows how any differences in the adoption of consumer technology tools may affect marketing decision.

Truth be told, The Marketing Consigliere advocates singling  La donna è mobile in the shower, but he knows that’s probably the only place besides the opera house where you should hear those words.  Many professional women who may not like to be stereotyped – while the authors are from the B2C realm, it would be interesting to see if the GAMES model has any viability in the B2B world with regard to women who make industrial buying decisions.

Can one characterize the difference between how a woman buys for an organization as opposed to how a man buys for an organization?   Do B2B Marketers make mistakes based on biases towards male dominated roles that are increasingly being performed by women?  The Marketing Consigliere would love to see more research on women in buying centers in B2B.  He’s willing to bet the findings would put the Duke of Mantua in his place.  In the meantime, buy the book to learn many solid experiences on how to market to women.