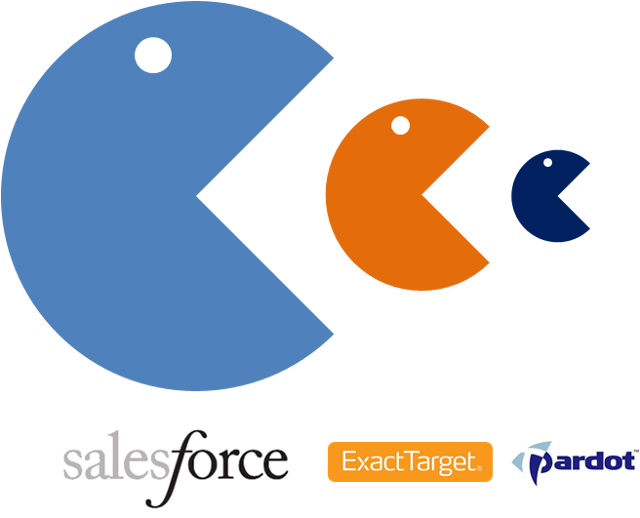 In October of 2012, email service provider ExactTarget announced the acquisition of Marketing Automation vendor Pardot for $95 Million.  Now, less than a year later, Salesforce annnounced the acquisition of ExactTarget for $2.5 Billion, outdoing Oracle‘s $871 Million acquisition of Marketing Automation vendor Eloqua, which had just IPO’d that August.  And let’s not forget Marketo, which recently IPO’d and as  of today has a market capitalization of $780+ Million.  What does this mean/what might happen next?

This is a brilliant move by Salesforce; the scuttlebutt of the industry is that Salesforce didn’t see a fit between it and Eloqua or Marketo, and the former was acquired by Salesforce’s arch-rival while Marketo probably always had its sights set on an IPO.  And despite its investment in HubSpot, that platform has come a long way but perhaps was not as advanced as Salesforce would have liked.

Salesforce obviously needed Marketing Automation, and Pardot had it; but Pardot was already acquired by ExactTarget, so Salesforce had to buy ExactTarget.  This is reminiscent of the late 1990s, when WorldCom wanted an IP backbone, and that backbone, operated by DIGEX, was already acquired by a mediocre competitive local exchange carrier known as Intermedia Communications.  WorldCom bought Intermedia and then got rid of the non-DIGEX assets.  Since the Pardot platform already had email capabilities baked into it, will Salesforce rid itselft of non-Pardot assets?

This also leaves a huge question mark for Marketo – who are possible buyers and how long will it last independently?  We think it won’t be a year before some bigger fish swims up and swallows it whole.  Will it get a handsome multiple or will it now be looked upon as less desirable?  While it truly has grown professionally, will a new owner allow it to be so aggressive from a marketing perspective?

And how about Act-On?  They have been up-and-coming in the Marketing Automation space, but will anyone ask them to dance in the near future as they grow?  The trio of Eloqua, Marketo, and Pardot have set the tone for what’s going on in the space, but will the lesser players be able to evolve and leverage these events?

One thing’s for sure – Marketing Automation has proven its value to the B2B Marketer, to the investor, and to Allinio.  It’s here to stay.  What else does anyone need to be convinced?